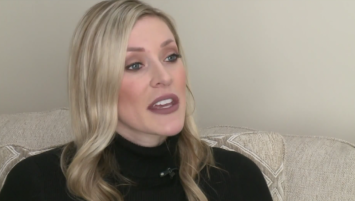 Just a few years ago Danielle Goldsmith was healthy and living a dream. She was a Ram’s cheerleader and very active. But in August on a hiking trip in Colorado, something went wrong.

“I remember looking at my boyfriend and saying I can’t breathe. I can’t see anything. I can’t hear anything. It was an out of body experience,” said Danielle Goldsmith.

That began over 3 months of painful episodes where Danielle would have severe chest pain, shortness of breath and unable to move. Making matters worse, no medical professionals and countless tests could diagnose or cure her.

Danielle started studying herself, she asked doctors if her symptoms were being caused by pectus excavatum? A condition where the breastbone sinks into the chest. She was tested with eco-cardiogram twice but nothing results were negative.

It wasn’t until October when at Barnes Jewish St. Louis that doctors decided to do a standing EKG, instead of lying down. It changed everything!